Tenants could begin moving into renovated units of an apartment complex in Frayser as early as March 2020.

The complex is being transformed in a $17 million project that will feature 146 units. Rent is expected to range from $450 to $690 per month, according to Roshun Austin, executive director of The Works Inc., which spearheaded the project.

The Works, a South Memphis community development corporation, owns the 6.4-acre property where the Renaissance at Steele Apartments will open when construction is completed. 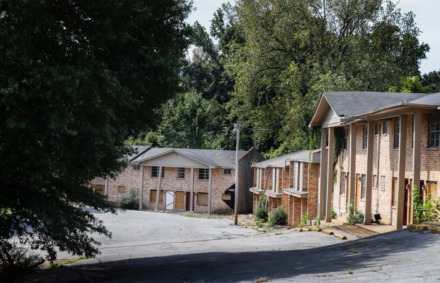 ComCap Partners will soon begin construction on the Renaissance at Steele Apartments project at 3085 Steele in Frayser. (Mark Weber/Daily Memphian)

ComCap Partners, founded by Archie Willis III, is co-developing the property. The company provides expertise for financial and real estate developments in areas that have historically faced disinvestment. Until 2016, ComCap Partners was known as Community Capital.

ComCap Partners has recently been involved with developments in Uptown and South City. Quincy Jones of ComCap is the project manager for the apartment complex renovation in Frayser.

After initial conversations about the project, it became clear MLK College Prep would be “the anchor” of this apartment complex renovation, Austin said.

“It’s a great strategy. It makes sense for stabilizing neighborhoods,” Austin said, “because you’re touching every aspect of the family.”

The project is more than renovating apartment units, however. The Works also plans to have a space for cooking classes, financial literacy courses and homeownership assistance.

Within a half-mile of the renovation, Girls Inc. Youth Farm plans to expand its facility at 1179 and 1199 Dellwood Ave., and Porter-Leath plans to build a child care center at 3060 Baskin St. near Whitney Avenue.

Frayser Community Schools Executive Director Bobby White lived in the now blighted apartment complex when he was a child. MLK College Prep is one of three schools operated by FCS, the others are Humes Middle School and Westside Middle School.

White said The Works investing near MLK College Prep — combined with other recent developments — will bring “new life” to the area.

“When something looks good, it makes people feel better about themselves that are about the community, and it’s right across the street from our school,” White said. “The enrollment impact is going to be great, but for me, more so … there’s enough going on positive around our schools that investors have wanted to provide the resources to bring back a property that when I was in high school was full.”

$9.5 million of the $17 million in funding for the project is from low income housing tax credit equity allocated by the state’s Department Housing Agency. The remaining $7.5 million is from a variety of loans including $950,000 from the City of Memphis Housing and Community Development.

The plan is to phase-in the 146 apartments, the first units likely being available next March, Austin said.

ArchInc. designed the renovation and Montgomery Martin Contractors is doing construction on the apartment renovation.

Roshun Austin is on the board of Memphis Fourth Estate Inc., the nonprofit that oversees The Daily Memphian.[/et_pb_text][/et_pb_column][/et_pb_row][/et_pb_section]